History of the Potato

More than a billion people worldwide eat potatoes, and global total crop production exceeds 300 million metric tonnes. While consumption in Europe has dwindled in recent years, planting has expanded in developing countries. This map from Potatopro shows the geographical distribution of potato cultivation.

Where did it all begin? 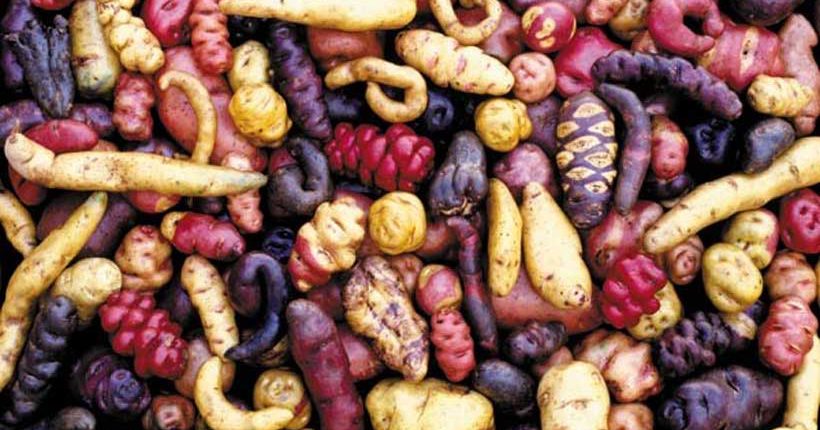 The potato was first cultivated in South America between three and seven thousand years ago, though scientists believe they may have grown wild in the region as long as 13,000 years ago. The first emergence of the potato has been traced back to the Peruvian Andes at around 6000BC. Communities migrated to the South American continent about 7000 years before the presence of wild potato plants which first sprouted up around Lake Titicaca located at a high altitude in the mountains. The archaeological remains of potatoes date from around 4000BC and have been found on the shores of Lake Titicaca. Examples of potatoes can be seen in Nazca and Chimu pottery. 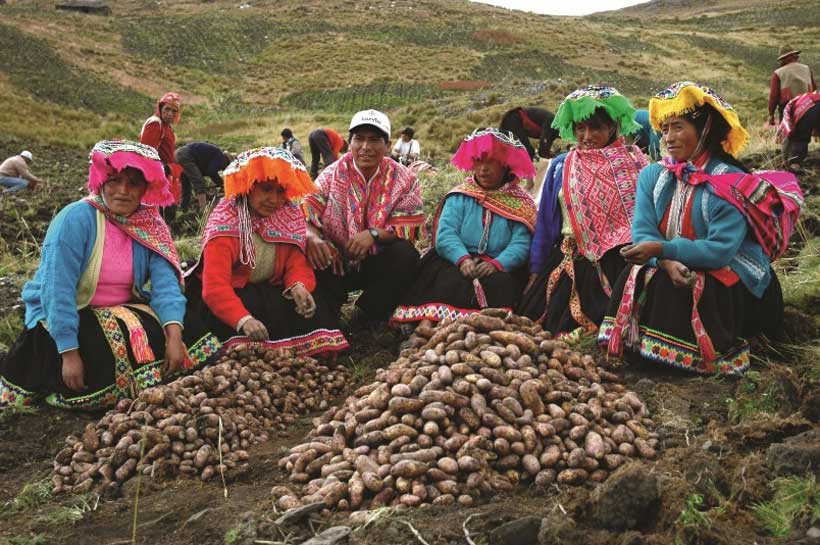 The Andean farmers worked out that potato growth was more successful at higher altitudes – potato seeds were then planted in what was called the ‘valley zone’. The successful growth of maize and potatoes around the area allowed civilisations to flourish around Lake Titicaca.

The Cuzco valley became inhabited by the Incas in 1400 at the dissolution of the Huari civilisation and the state of Tiahuanacu in the years 1000 – 12000. This was the largest and fastest expanding settlement in the Americas at the time. They became more advanced in the agricultural approaches set down by their ancestors which brought about a tremendous boost in maize and potato produce. A potato product called chuño became one of the main food items. Raw potatoes were frozen and thawed outdoors repeatedly before farmers squeezed the remaining water from them. This dried food product preserved well without refrigeration and became backup stock for any failed harvests. Cooked into a spicy Andean stew, Chuño resembles gnocchi, the potato-flour dumplings in central Italy. The potato was referred to as “the people’s food”, being deeply embedded in the Andean culture. It was the food that sustained Inca armies. 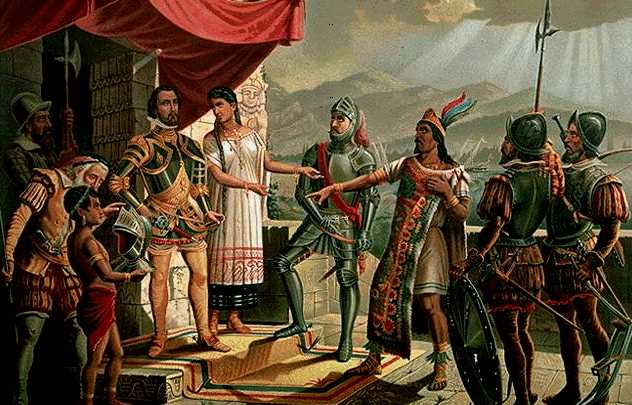 The Spanish conquered the Inca civilisation in 1532. This historical event led to the potato’s introduction to European shores after the Spanish returned to their lands with the crop in cargo.

Given the fact that the Spanish were the first Europeans to encounter the potato in the New World, and the first to cultivate it on the European mainland, it should come as no surprise that the Spanish may have been responsible for bringing the first tubers to Irish shores. Given that the potato thrived in Ireland from a very early date it was probably solanum tuberosum rather than andigena that was introduced. Certainly 1586 would seem to be the earliest feasible date for introduction to Ireland, and 1600 the latest. No written evidence exists which refers to the beginnings of potato cultivation in Ireland.

The potato was often referred to as An Spáinneach or An Spáinneach Geal [the white, or kind hearted Spaniard] in its early history. This would suggest a point of origin in Spain itself, or that a Spaniard was responsible for introducing the potato to Ireland. Overseas exchanges with Spain and France involving the export of hides and fish, and imports of wine and cloth were quite substantial. The introduction of the tuber as a curiosity from Spain through Waterford, seems highly plausible.

Although Sir Walter Raleigh was mayor of Youghal in 1588-89, he didn’t spend much time in the country. He had some association with potatoes through his travels to South America. However, claims that he grew potatoes at his home in Cork are unproven.

The journey of the potato continued to wider Europe in the possession of sailors who brought the crop to various ports. It soon become a staple crop, often grown first on fallow ground. 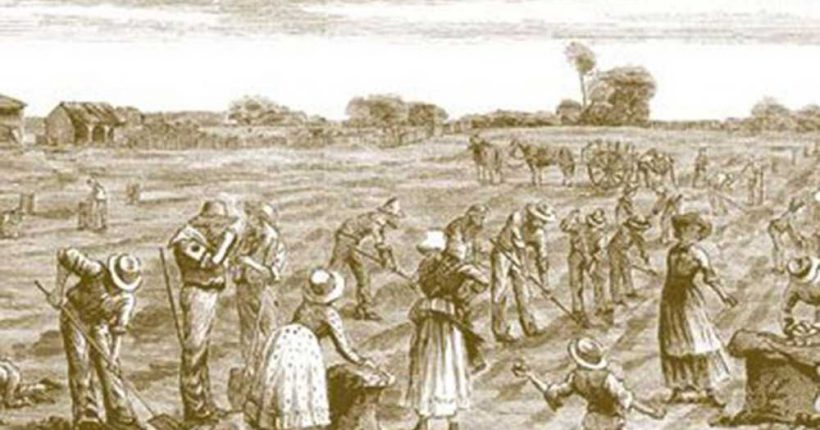 No other European nation has a more special relationship with the potato than Ireland. The Irish were the first Europeans to accept it as a field crop in the 17th century, and the first to embrace it as a staple food in the 18th century. The potato emerged strongly in Ireland because it suited the soil, climate and living conditions remarkably well.

The potato was seen as a safeguard against the tandem social plagues of unemployment, poverty, overpopulation and land hunger. By 1780, at a population level of four million, those afflictions had helped push the potato to dominance. In 1830, young adult males in Ireland were consuming 5 kgs per capita per day. By 1841, four years before the Famine, the population had literally doubled to 8.15 million – a phenomenal increase by any standard.

The only problem with potatoes is their susceptibility to disease, the worst of which, Phytophtora infestans, is known more commonly as blight. Before 1842, potato blight was only known in Mexico, where it began in the Toluca Valley on the central plateau. That year, however, it turned up in New Hampshire and Vermont and three years later it appeared in Belgium.

By Mid-August 1845, it had spread to northern France and southern England; it arrived in Ireland in September, with demographic consequences which have shaped our history ever since. Irish dependence on a single crop for sustenance was devastating.

Once established, the spread of the disease is highly weather dependent. It has been found that the ideal conditions for the spread of the disease are a relative humidity greater than about 90 per cent, and temperature in excess of about 10c, both occurring simultaneously over an extended period. Nowadays, potato blight can be controlled – but it has not, as some city-dwellers might suspect, become extinct.

The events of 1845-52 which ensued in Ireland became known as the Great Famine and constituted a cataclysm unequalled in Irish history. With more than a million dead from starvation and disease, and more than a million in exodus from Ireland to Britain, North America and Australia, today Ireland remains one of the few European nations whose population is smaller than it was during the nineteenth century. One to one and a half million people left Ireland between 1845 and 1851 and as many as a further two million in the subsequent twenty years.

The impact of the Great Famine devastated Irish culture, language and social demographics. It formed the basis for the massive Irish diaspora, which in turn had a huge impact on the social history of destination countries and paved the eventual road to revolution and Irish independence. The prime destination was overwhelmingly the United States for 80% of emigrants. Irish emigration became unique in its scale, duration and geographical spread. Furthermore, the effect of this diaspora on the social history of the destination countries was immense. For example, by 1850, New York, with more than 250,000 Irish-born residents, was the most Irish city in the world. Twenty-two US Presidents have had Irish roots. 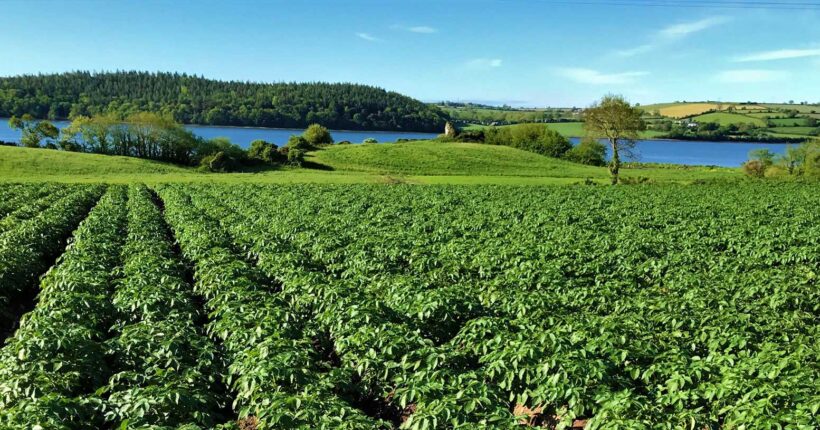 The potato has become a fundamental ingredient to a vast majority of the world’s cuisines. With crops growing annually on 17.58 million hectares it currently sits at number four on the list of largest staple food crops on the planet following rice, wheat and maize. In the past few decades, the potato has become popular in Southern and Eastern Asia. Now, nearly a third of the entire planet’s potatoes are harvested in India and China.

We use cookies to personalise content and ads, to provide social media features and to analyse our traffic. We also share information about your use of our site with our social media, advertising and analytics partners who may combine it with other information you've provided to them or they've collected from your use of their services. To continue browsing on this site you will need to either opt in or out to our use of cookies by clicking 'Accept' or 'Don't Accept'AcceptDon't AcceptCookie Policy