The potato, we are told, is the best package of nutrition in the world, being rich in calories, minerals, vitamins and protein and virtually free of fat. It has no known allergens and is gluten free. Potatoes supply every vital nutrient except calcium, vitamin A and vitamin D. The crop can be grown across a diverse range of soil types and climatic conditions and has the ability to provide more nutritious food faster on less land than any other food crop, and in almost any habitat.

The potato is a member of the Solanaceae family, which includes tomatoes, aubergines and peppers. There are about 150 species in the wild, but only one, Solanum tuberosum, is grown outside the Andes. Within this species, however, there are thousands of different varieties. The International Potato Centre in Peru has preserved almost 5,000 varieties and new varieties are constantly in development.

The Irish potato market has been through many changes over the years as the popularity of varieties changes. Traditionally Irish people like a “floury” potato with medium-high dry matter. Most of our popular varieties are above 20% dry matter.

As follows is an approximate breakdown of the Irish potato market by variety:

These other varieties are mainly white skinned potatoes, the most popular being Maritiema, Cultra, Navan, Nectar and Electra. These tend to be a low to medium dry matter.

Most Popular Potato Varieties in Ireland 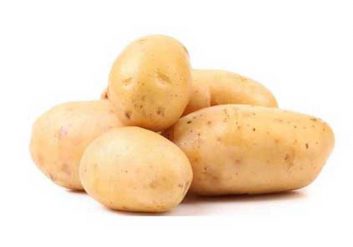 This first early variety was first introduced in 1942 and falls into the waxy category. It is a creamy coloured potato with loose, thin skin and a creamy flesh. High-yielding and with good resistance to scab, it found huge commercial success during the second world war. They are generally harvested in May 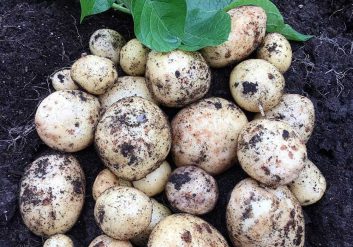 First introduced in 1979 this early variety is popular due to its very early maturity and high dry matter content. Oval in shape, with cream skin and light yellow flesh, they are used in both fresh and processing sectors. They are among the first potatoes harvested every year, usually in May or June depending on the Irish weather. Premieres make fabulous chips, roast potatoes and mash. It is equally good boiled or steamed. 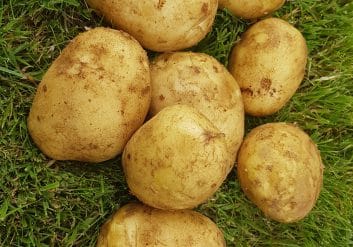 The British Queen variety was bred by the Scottish breeder Archibald Finlay in Lincolnshire and first marketed in 1894. The variety is still popular in Ireland where it is sold as ‘Queens’. British Queen is a second early variety producing a moderate to high yield of white-skinned, oval tubers with a white flesh and dry floury texture. It has a floury flesh. It is a high dry matter variety, much loved in Ireland for its taste and flavour.

Queens are marketed early in the season just after the first early potatoes, so they are often referred to as a ‘second early variety’.

This potato can be described as a tasty and delicious all-rounder potato, suitable for most cooking types including steaming, boiling, roasting, mashing and chipping. 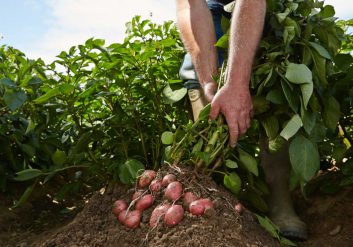 The Rooster potato was introduced to the Irish market in 1991 and was an instant success. It’s a “grower-friendly” variety with good yield and disease resistance characteristics and is very versatile in terms of its use. It can be boiled, mashed, steamed, makes fantastic roast potatoes and is very good for wedges and home fries. The combination of recognisable red skin, a memorable name, and versatility in terms of use in the kitchen has enabled the Rooster potato to become very recognisable and successful.

The Rooster potato was developed through the Teagasc & IPM Potato Group potato breeding partnership at Teagasc, Oak Park, Carlow, where the late Harry Kehoe and his team have developed more than thirty potato varieties.

The Rooster is a main crop potato, has a high dry matter content with yellow flesh and red skin with a floury texture and deep earthy flavour. Known as the housewives’ favourite, the Rooster variety is popular for its versatility. Their ease of wash and peel is attractive for speed of preparation.

The Rooster has quickly become the most popular fresh ware potato variety in Ireland, accounting for almost 6 in 10 potatoes grown and sold in Ireland. 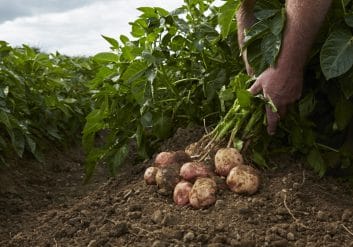 Kerr’s Pink is a white late main crop potato which competes in the same category as the most popular Rooster variety. It’s a popular traditional ‘shallow eyed’ potato variety, grown since the 1920’s in Ireland. It has a pink skin and white flesh. Often quoted as an Irish potato, the cultivar was originally named Henry’s Seedling, created by J. Henry of Cornhill, Scotland in 1907 and is popular in the UK and many other European countries.

It would be very popular in the west of Ireland in particular and is an excellent potato for boiling and mashing. 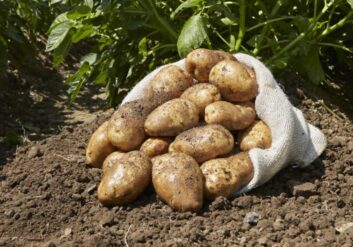 Golden Wonder is a late maturing variety and there is now only a small area of this variety grown in Ireland. It is traditionally used more in the west of the country.

This potato was originally bred in Scotland by a Mr. Brown of Arbroath in 1906. It is an oval variety with relatively rough russet coloured skin, cream to yellow in colour. It is a very floury potato due to its high dry matter (up to 28%) with good overall taste. The potato exhibits excellent dormancy making it very suitable to store for long periods.

If you like floury potatoes – then Golden Wonder is the king. It is suitable for most cooking methods including boiling, steaming, roasting and chipping. 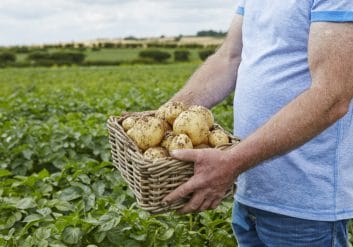 This variety is one of the most popular varieties grown in the UK but also popular in Ireland. It has white skin and white flesh and is a high dry matter potato.

Maris Piper potatoes originated in Ireland from grower John Clarke in 1963. Clarke created over thirty-three certified varieties of potatoes and worked closely with Dr Harold Howard who was in charge of the Cambridge breeding institute. Many new varieties were grown at the institute and given the first name of “Maris” due to the location of the institute on Maris Lane.

The tubers are oval and shallow-eyed.

The best attribute of this high dry matter variety is that Maris Piper develops a lovely crunchy outside, with a deliciously floury creamy middle for chips and roast potatoes. They are also popular for mashing. 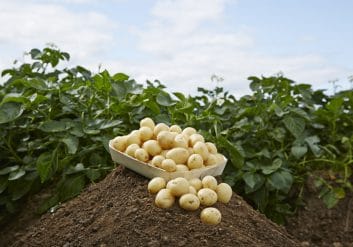 This segment of the market represents two distinctly different types of potato.

Salad potatoes account for about 20% of sales. These varieties are a long oval shape with yellow skin colour and cream to yellow flesh. The main varieties are Charlotte, Jazzy, and Venezia.

Typical dry matter is low at only around 17%. When cooked these potatoes are waxy or soapy.
This segment of potato trade is growing annually. Salad and Baby potatoes are mainly sold in a 500g or 1kg pack and are sold in a size range of 25-45 mm. Users find the small sized potatoes convenient in busy working lives as they need little preparation and cook quickly.

Previously grown in many other European countries and imported into Ireland, Irish growers have up-skilled and invested in growing this segment in recent years, with the South East of the country proving the most favourable for varieties such as Gemson, Lucera and Jester. Ireland is now 80% self-sufficient in salad and baby potatoes. 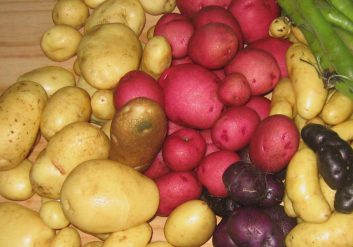 Other varieties which make up 10% of the Irish crop are mainly white skinned potatoes, the most popular being Maritiema, Cultra, Navan, Nectar and Electra. These tend to have low to medium dry matter.

Due to the popularity of potatoes in Irish History a record has been made of important heritage varieties that were used through the years since its first introduction. Click here to read more

We use cookies to personalise content and ads, to provide social media features and to analyse our traffic. We also share information about your use of our site with our social media, advertising and analytics partners who may combine it with other information you've provided to them or they've collected from your use of their services. To continue browsing on this site you will need to either opt in or out to our use of cookies by clicking 'Accept' or 'Don't Accept'AcceptDon't AcceptCookie Policy